Republican US Senator James Lankford has apologised in a letter to Tulsa, Oklahoma’s Black community for failing to recognise that challenging United States electoral results leading to President-elect Joe Biden’s victory during a joint session of Congress could be interpreted as an attempt to silence Black voters.

Tulsa is nearing the 100th anniversary of the Tulsa Race Massacre of 1921, which saw white residents attack the affluent Greenwood district, called the “Black Wall Street”, killing at least 36 people, though historians estimate the number to be higher.

The city set up a Tulsa Race Massacre Commission in 1996 and has worked to raise awareness and investigate the atrocity. Lankford, an Oklahoma conservative elected to the US Senate in 2014, has played a prominent role on the commission.

Members of Tulsa’s Black community called for Lankford’s removal from the commission after he joined 146 Republican legislators who challenged the results on January 6, the day a far-right mob of President Donald Trump’s supporters stormed the US Capitol in an apparent attempt to overturn the election.

Lankford was demanding a 10-day review of electoral results by a commission in front of the Senate as the body was swiftly adjourned when rioters breached the Capitol.

Tulsa’s Black leaders say the challenges were meant to disenfranchise their community, who have faced historic racism and denial of the right to vote in the US.

State Representative Monroe Nichols told the Tulsa World the challenge was “a great example of Black people voting in record numbers, with a coalition of people who look different, who are being told, ‘No, their votes didn’t count’”.

Lankford said in his letter on Thursday that in proposing an electoral commission, he never intended “to disenfranchise any voter or state”.

“I should have recognized how what I said and what I did could be interpreted by many of you,” Lankford continued. “I deeply regret my blindness to that perception, and for that I am sorry.”

Tulsa media claims this is because he plays a less-prominent role on the commission.

Other legislators have continued to defend their decision to challenge the results, the culmination of months of claims of voter fraud from Trump and Republican leaders.

Authorities, including Trump-appointed officials, have found no evidence of widespread voter fraud.

The Capitol riot has left at least five dead, including one Capitol police officer, and more than 70 arrested as the result of an ongoing, nationwide law enforcement investigation. 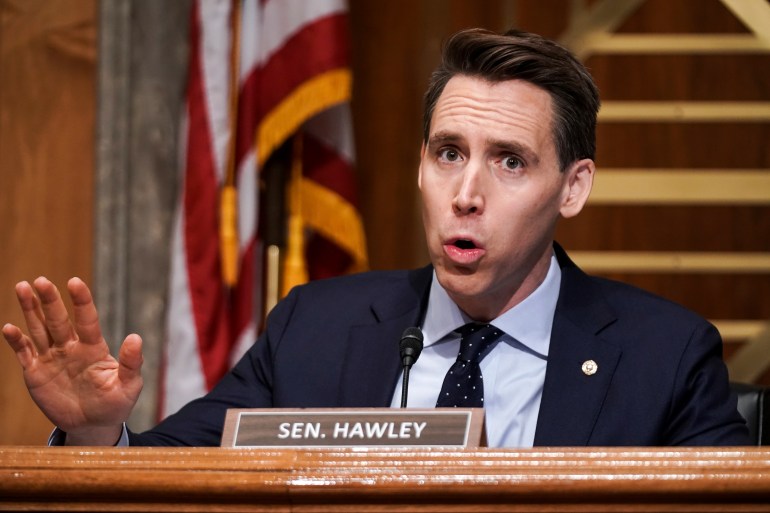 Hawley, whom many considered a rising star on the political right, has defended his challenge as raising the issue of election integrity.

In a column in the Southeast Missourian newspaper, Hawley wrote his objection “proceeded according to the letter of the statute, which specifically permits for objections and debate, and followed the traditions of Congress”.

Hawley continued his objection after the violence and has faced calls to resign from his colleagues.