Any number of historic moments in the civil-rights struggle have been used to identify Martin Luther King, Jr. — prime mover of the Montgomery bus boycott, keynote speaker at the March on Washington, youngest Nobel Peace Prize laureate. But in retrospect, single events are less important than the fact that King, and his policy of nonviolent protest, was the dominant force in the civil-rights movement during its decade of greatest achievement, from 1957 to 1968. 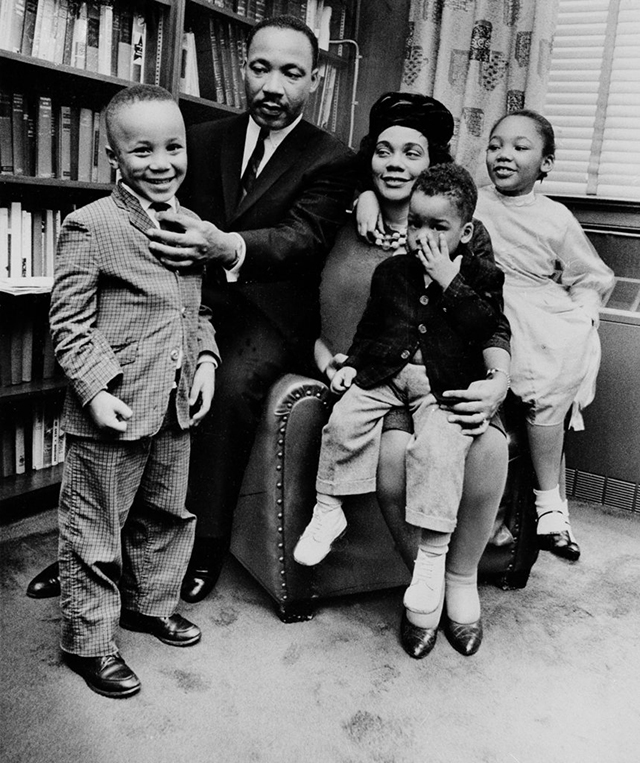 King was born Michael Luther King in Atlanta on Jan. 15, 1929 — one of the three children of Martin Luther King Sr., pastor of Ebenezer Baptist Church, and Alberta (Williams) King, a former schoolteacher. (He was renamed “Martin” when he was about 6 years old.)

After going to local grammar and high schools, King enrolled in Morehouse College in Atlanta in 1944. He wasn’t planning to enter the ministry, but then he met Dr. Benjamin Mays, a scholar whose manner and bearing convinced him that a religious career could be intellectually satisfying as well. After receiving his bachelor’s degree in 1948, King attended Crozer Theological Seminary in Chester, Pa., winning the Plafker Award as the outstanding student of the graduating class, and the J. Lewis Crozer Fellowship as well. King completed the coursework for his doctorate in 1953, and was granted the degree two years later upon completion of his dissertation.

Married by then, King returned South to become pastor of the Dexter Avenue Baptist Church in Montgomery, Ala. There, he made his first mark on the civil-rights movement, by mobilizing the black community during a 382-day boycott of the city’s bus lines. King overcame arrest and other violent harassment, including the bombing of his home. Ultimately, the U.S. Supreme Court declared bus segregation unconstitutional.

A national hero and a civil-rights figure of growing importance, King summoned together a number of black leaders in 1957 and laid the groundwork for the organization now known as the Southern Christian Leadership Conference (SCLC). King was elected its president, and he soon began helping other communities organize their own protests against discrimination.

After finishing his first book and making a trip to India, King returned to the United States in 1960 to become co-pastor, with his father, of Ebenezer Baptist Church. 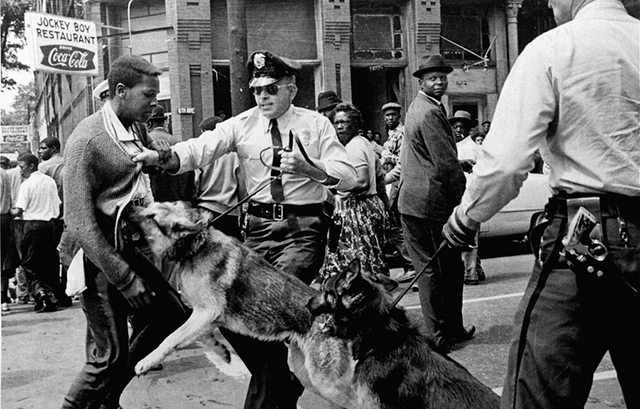 Police use dogs to quell civil unrest in Birmingham, Ala., on May 3, 1963. Birmingham’s police commissioner “Bull” Connor also allowed fire hoses to be turned on young civil rights demonstrators. These measures set off a backlash of sentiment that rejuvenated the flagging civil rights movement. (Bill Hudson / The Associated Press)Three years later, King’s nonviolent tactics were put to their most severe test in Birmingham, during a mass protest for fair hiring practices and the desegregation of department-store facilities. Police brutality used against the marchers dramatized the plight of blacks to the nation at large, with enormous impact. King was arrested, but his voice was not silenced: He wrote “Letter from a Birmingham Jail” to refute his critics.

Later that year King was a principal speaker at the historic March on Washington, where he delivered one of the most passionate addresses of his career. Time magazine designated him as its Person of the Year for 1963. A few months later he was named recipient of the 1964 Nobel Peace Prize. When he returned from Norway, where he had gone to accept the award, King took on new challenges. In Selma, Ala., he led a voter-registration campaign that ended in the Selma-to-Montgomery Freedom March. King next brought his crusade to Chicago, where he launched programs to rehabilitate the slums and provide housing.

In the North, however, King soon discovered that young and angry blacks cared little for his preaching and even less for his pleas for peaceful protest. Their disenchantment was one of the reasons he rallied behind a new cause: the war in Vietnam.

Although he was trying to create a new coalition based on equal support for peace and civil rights, it caused an immediate rift. The National Association for the Advancement of Colored People (NAACP) saw King’s shift of emphasis as “a serious tactical mistake.” The Urban League warned that the “limited resources” of the civil-rights movement would be spread too thin.

But from the vantage point of history, King’s timing was superb. Students, professors, intellectuals, clergymen and reformers rushed into the movement. Then, King turned his attention to the domestic issue that he felt was directly related to the Vietnam struggle: poverty. He called for a guaranteed family income, he threatened national boycotts, and he spoke of disrupting entire cities by nonviolent “camp-ins.” With this in mind, he began to plan a massive march of the poor on Washington, D.C., envisioning a demonstration of such intensity and size that Congress would have to recognize and deal with the huge number of desperate and downtrodden Americans.

King interrupted these plans to lend his support to the Memphis sanitation men’s strike. He wanted to discourage violence, and he wanted to focus national attention on the plight of the poor, unorganized workers of the city. The men were bargaining for basic union representation and long-overdue raises.

But he never got back to his poverty plans. Death came for King on April 4, 1968, on the balcony of the black-owned Lorraine Hotel just off Beale Street in Memphis. While standing outside with Jesse Jackson and Ralph Abernathy, King was shot in the neck by a rifle bullet. His death caused a wave of violence in major cities across the country.

However, King’s legacy has lived on. In 1969, his widow, Coretta Scott King, organized the Martin Luther King Jr. Center for Non-Violent Social Change. Today it stands next to his beloved Ebenezer Baptist Church in Atlanta. His birthday, Jan. 15, is a national holiday, celebrated each year with educational programs, artistic displays, and concerts throughout the United States. The Lorraine Hotel where he was shot is now the National Civil Rights Museum.↑ TOP

Part I: 1956-1962Dr. Martin Luther King Jr. establishes himself as the national leader of the civil-rights movement, leading boycotts and staging protests against segregation in the South.Part II: 1963-1965Voting rights becomes the focus of King and other civil-rights leaders. They organize protests across the nation, bringing more attention to their efforts – and more violent responses from opponents.Part III: 1966-1968King’s opposition to the Vietnam War makes headlines while his battle for civil rights continues. But on April 4, 1968, an assassin’s bullet ends his crusade.