US law enforcement agencies are screening all 25,000 National Guard officers deployed for President-elect Joe Biden’s inauguration, fearing a possible insider attack after it emerged that some of those involved the deadly January 6 riot at the US Capitol had ties to security agencies.

“In coordination with the Secret Service and the FBI, they’re screening all the personnel that are coming in,” General Daniel Hokanson, who heads the National Guard Bureau, told CBS News on Sunday.KEEP READINGTop US generals condemn Capitol assault in rare message to troopsThe Capitol riot exposed police double standardsCan the United States’s global reputation be repaired?The comments by the four-star general come as the capital Washington, DC, remains locked down under unprecedented security in the wake of the storming of the Capitol – the seat of the US government – by supporters of outgoing President Donald Trump.

At least five people died in the worst riot in almost two centuries, and prompted the US Congress to impeach President Trump for “incitement of insurrection”.

Speaking from Washington, DC, Al Jazeera’s Shihab Rattansi said that ahead of Wednesday’s inauguration day, the National Guard is no longer relying on its usual vetting mechanisms to ensure that those within the service are not radicalised in some way.

“The new development that’s been reported is that the FBI is now getting involved.”

Rattansi said the FBI is running the names of the National Guard officers through its own databases, “checking for any red flags, any connection to extremist or militia groups”.

At least 21 current and ex-members of the US army and law enforcement have been identified as being at or near the Capitol riot, The Associated Press (AP) reported.

The US Army has also been investigating a psychological operations officer who led a group of people from North Carolina to the rally. Captain Emily Rainey, who had said she acted within military regulations, later resigned.

On the lookout for problems

Secretary of the Army Ryan McCarthy told AP on Sunday that officials are conscious of the potential threat, and he warned commanders to be on the lookout for any problems within their ranks as the inauguration approaches.

So far, he and other leaders say they have seen no evidence of any threats, and officials said the vetting had not flagged any issues they were aware of.

”We’re continually going through the process, and taking second, third looks at every one of the individuals assigned to this operation,” McCarthy said in an interview after he and other military leaders went through an exhaustive, three-hour security drill in preparation for Wednesday’s inauguration.

He said Guard members are also being trained on how to identify potential insider threats. 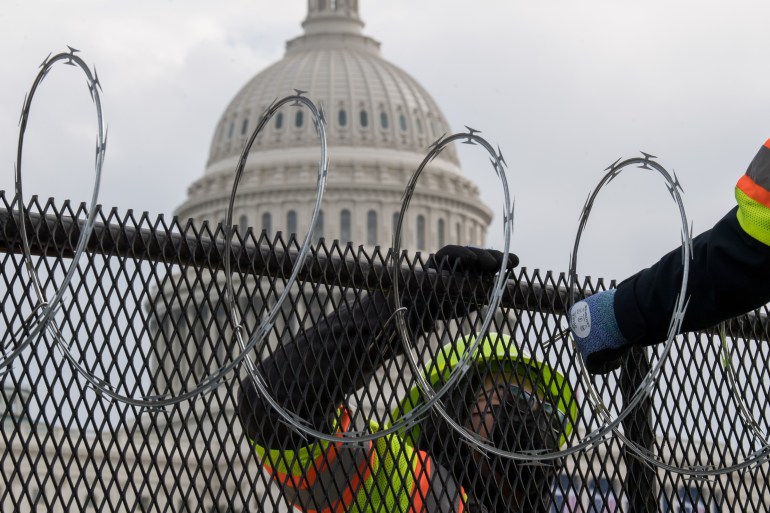 Crews install razor wire on top of fencing that now surrounds the US Capitol ahead of the inauguration on January 15, 2021 in Washington, DC [Liz Lynch/Getty Images/AFP]Much of Washington, DC, resembles a fortified compound in a war zone, with most of the downtown area blocked off, security fences topped by razor wire and about 25,000 National Guard troops – at least two and a half times the number for previous inaugurals –  deployed to the capital.

In a recent letter to all US troops, the Joint Chiefs of Staff told service members the January 6 riots were “inconsistent with the rule of law” and said troops “must embody the values and ideals of the nation.”

Hokanson said he believes his troops have been adequately equipped and prepared, and that they are rehearsing as much as they can to be prepared for any contingency.

The major security concern is an attack by armed groups of individuals, as well as planted explosives and other devices. McCarthy said intelligence reports suggest that groups are organising armed rallies leading up to Inauguration Day, and possibly after that.

The Secret Service is in charge of event security, but there are other military and law enforcement personnel involved, ranging from the National Guard and the FBI to Washington’s Metropolitan Police Department, US Capitol Police and US Park Police.

The bulk of the Guard members will be armed, McCarthy saying units are going through repeated drills to practice when and how to use force and how to work quickly with law enforcement partners. Law enforcement officers would make any arrests needed. 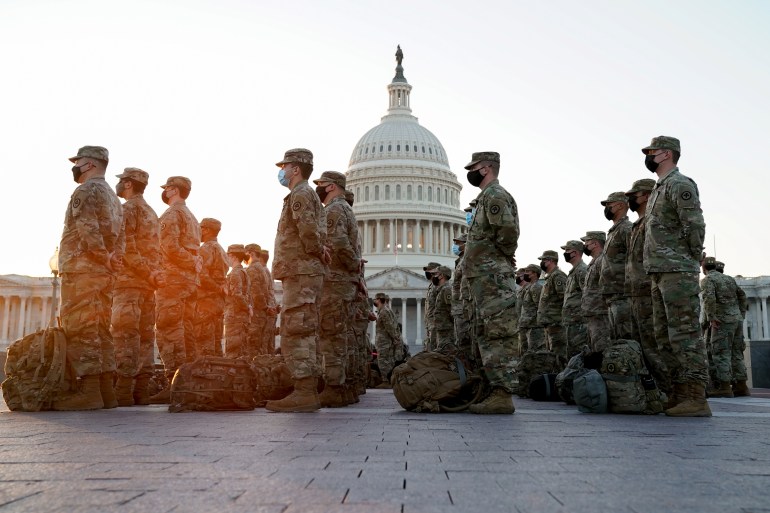 About 25,000 National Guard troops will be deployed to the capital [File: Erin Scott/Reuters]He said Guard units are going through “constant mental repetitions of looking at the map and talking through scenarios with leaders so they understand their task and purpose, they know their routes, they know where … friendly, adjacent units are, they have the appropriate frequencies to communicate with their law enforcement partners.”

The key goal, he said, is for America’s transfer of power to happen without incident.

“This is a national priority. We have to be successful as an institution,” said McCarthy. “We want to send the message to everyone in the United States and for the rest of the world that we can do this safely and peacefully.”

Meanwhile, the US Department of Justice said on Sunday it had arrested an elected official from New Mexico who had vowed to travel to Washington with firearms to protest Biden’s inauguration.

Cuoy Griffin, a New Mexico county commissioner and founder of a group called “Cowboys for Trump,” was arrested in Washington on charges related to the January 6 attack against the US Capitol.

Griffin was among thousands who stormed the Capitol in an attempt to block Congress from certifying Democrat Biden’s victory over Republican President Donald Trump, according to charging documents. He stood on the steps of the building but did not enter it.

According to an FBI document, Griffin said he planned to return ahead of Biden’s inauguration this Wednesday.

“If we do, then it’s gonna be a sad day, because there’s gonna be blood running out of that building,” he said in a video posted to Facebook.