These pacts are known as the “Abraham Accords” and in some cases, such as with the UAE and Morocco, formalise existing relations, according to observers. They paved the way for a large arms deal with the UAE, which came under heavy criticism from legislators.

Trump himself is nominated for the peace prize. President Joe Biden’s administration is expected to review all national security deals struck during the Trump administration, including arms packages for the United Arab Emirates and Saudi Arabia.

“Abrams’ work follows in Dr Martin Luther King Jr’s footsteps in the fight for equality before the law and for civil rights,” Lars Haltbrekken, a Socialist Party member of Norway’s parliament, said while announcing her nomination. 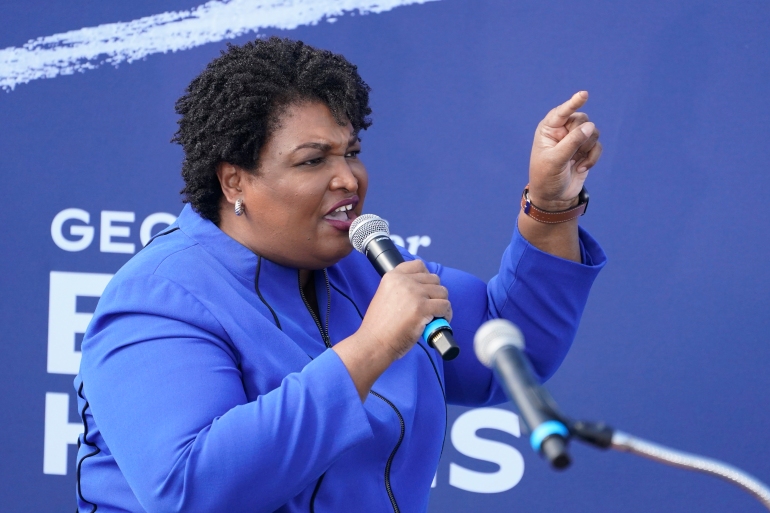 Former candidate for Georgia Governor Stacey Abrams speaks during a rally for then-Democratic vice presidential candidate Senator Kamala Harris in Duluth, Georgia, on November 1 [File: John Bazemore/Ap Photo]Black people in the US have long faced hurdles at the ballot box, but Abrams’ group Fair Fight worked to register thousands and raised $100m after her failed run for Georgia governor in 2018.

Abrams claimed she lost the election due to voter suppression and is expected to launch another run in 2022. Her work has inspired rival Republican strategists to organise against her efforts.

The group’s senior strategist Jeremy Brand said in a statement:  “We will do whatever it takes to expose Stacey Abrams’ radical network, highlight her dangerous agenda, and ultimately defeat her – and her left-wing candidates – at the ballot box.”

The US Black Lives Matter movement, as well as Daniel Ellsberg, who leaked the “Pentagon Papers” about the Vietnam War, and WikiLeaks, have also been nominated, as have pro-democracy and civil rights campaigners from Belarus to Poland and Hungary.

The Norwegian Nobel Committee, which decides who wins the award, does not comment on nominations, but nominators can choose to reveal their picks.SOURCE : AL JAZEERA AND NEWS AGENCIES