Last week, in a surprise ruling, a Brazilian Supreme Court judge quashed all corruption convictions against former President Luiz Inacio Lula da Silva, restoring his political rights and opening the door to a possible 2022 presidential run.Lula, the 75-year-old leftist leader from the Workers’ Party (PT), has not yet confirmed whether he intends to run next year, but he and his defence team view the judge’s ruling as a testament to his innocence.In an address to the nation on Wednesday, Lula described the sprawling anti-corruption case in which he was convicted as “the biggest judicial lie told in 500 years of Brazilian history”.However, legal experts have pointed out that the judge’s decision could still be reversed – and many questions remain unanswered about what comes next.“If the elections were today, Lula could be a candidate for the presidency,” explained Renato Ribeiro de Almeida, a lawyer specialising in electoral and state law from the Polytechnic School of the University of São Paulo.“However, for him to remain eligible, he would need to remain free of any convictions until the candidacy registration in August 2022. Until then, Lula may be convicted again.”

In his decision on March 8, Judge Edson Fachin ruled that Lula’s four corruption convictions – two are still pending judgement – were not held in the proper trial venue.

In July 2017, Lula was convicted of money laundering and corruption in relation to improvements to a beachfront apartment on the coast of São Paulo, which the court ruled was a kickback from a construction company. He served 580 days in prison before being released in November 2019 on appeal.

The convictions stem from Operation Car Wash (Lava Jato), a massive anti-corruption probe involving the state-owned Petrobras Oil Company, that brought down hundreds of Brazil’s most powerful politicians and business executives. At the time, Curitiba was at the centre of the anti-corruption investigations.

Fachin accepted a years-long argument from Lula’s defence lawyers that since Lula was president and resided in Brasilia at the time of the allegations – and since the corruption case against Lula was unrelated to Petrobras, and thus Car Wash – the case should be sent to the Federal Court of Brasilia for retrial.

Fachin has now nullified the convictions related to Lula’s beachfront property, as well as other charges that were still pending a ruling, including donations to the Lula Institute and improvements to a farmhouse – but the judge has not invalidated the evidence collected in the probe.

Fachin’s decision can still be overturned. Brazil’s attorney general filed an appeal on March 13 to the Supreme Court, which is expected to issue a ruling in the coming days.

Bruno Fernandes, a criminal lawyer and expert in penal law at Braga and Fernandes Lawyers, a firm in Rio de Janeiro, said the top court is unlikely to overturn Fachin’s ruling.

“This is because Fachin was always a defender of Operation Car Wash and it’s not credible to imagine that he made this decision without the support of the Supreme Court judges,” Fernandes told Al Jazeera.

Given the short timeframe before the elections and the strenuous pace of Brazil’s judiciary system, few believe a retrial could be completed within the next 16 months. 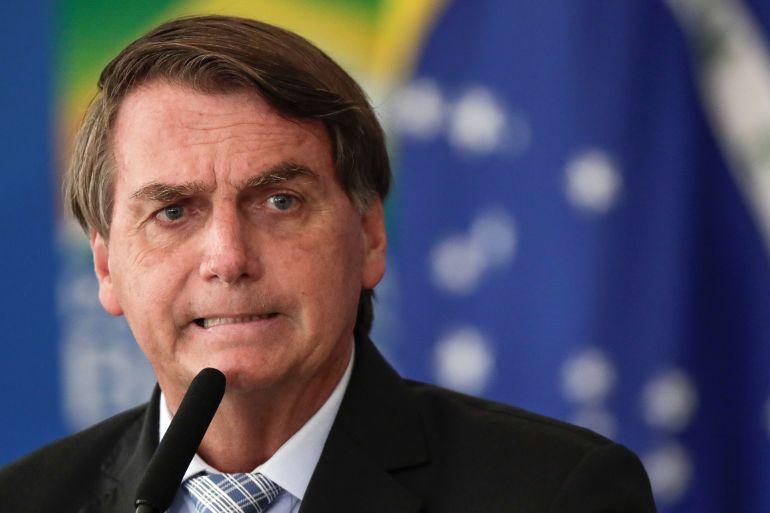 Brazil’s far-right President Jair Bolsonaro has accused Fachin, who overturned Lula’s convictions, of having a ‘strong connection’ to the former president’s political party [File: Ueslei Marcelino/Reuters]But Marilda Silveira, a specialist in electoral law and a member of the Brazilian Academy of Electoral and Political Law (Abradep), has not ruled out the possibility that Lula could be convicted again, and thus blocked from seeking the presidency.

“There are a lot of factors that could change. The electoral law could change, the position of the Supreme Court and the cut-off date for president enrollment can change. In Brasilia, they could essentially judge the cases quickly,” she told Al Jazeera. “But some processes take years.”

Even if a retrial could take place in time, a separate motion before the court seeks to retract all evidence and charges against Lula on the grounds that former Federal Judge Sergio Moro, who oversaw Lula’s case, had not been neutral.

Messages leaked by The Intercept in 2019 revealed that Moro had been actively directing prosecutors in the case.

Moro acted as justice minister in far-right President Jair Bolsonaro’s government from January 2019, just months after issuing the decision that rendered Lula ineligible to run in the 2018 election – raising questions about whether the probe was politically motivated.

In Brazilian law, cases are assigned at random to prevent judges and defendants from being able to influence the process.

But if cases are inextricably linked, that rule can be circumvented. Prosecutors originally argued that the link between Lula’s convictions and Petrobras meant he should be tried in Curitiba, but the leaked messages showed even the prosecutors thought the link was dubious. 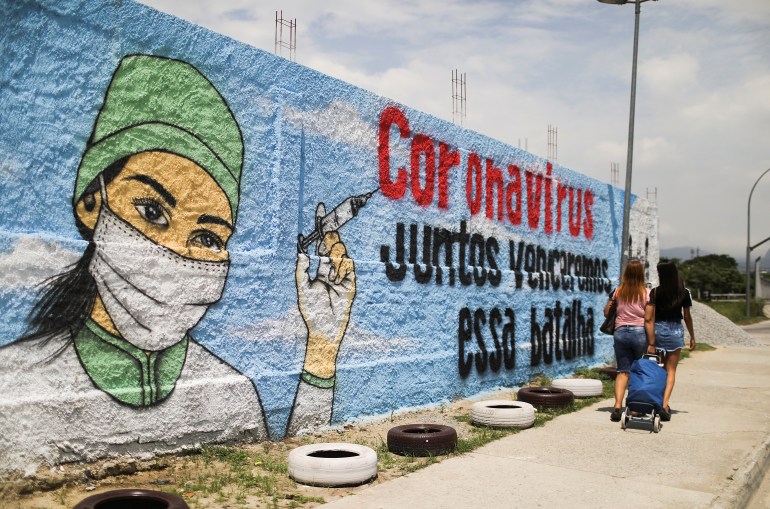 The judge’s ruling last week came as Brazil is struggling to get surging numbers of COVID-19 infections and coronavirus-related deaths under control [File: Pilar Olivares/Reuters]“Lula’s defence has questioned the legitimacy of the court location for five years,” said Fernandes, who added that he believes Moro’s probe overstepped legal boundaries and “did not honour Lula’s right to a fair trial”.

On Tuesday, Supreme Court Judge Gilmar Mendes voted to take Moro to trial on allegations the former judge did not act impartially in Lula’s case. Although a trial has been announced, a specific date for the hearing has not yet been confirmed.

If Moro is convicted, all the evidence he gathered will be thrown out, making it unlikely there will be enough time to fully re-examine Lula’s case before the elections next year.

Moro continues to deny wrongdoing, saying “fanciful hypotheses” were created about the leaked messages and the attacks were “unfair”. For his part, Bolsonaro responded to the leaked messages by threatening to imprison The Intercept journalist, Glenn Greenawald, for unspecified crimes.

Renato Janine Ribeiro, a professor of ethics and philosophy at the University of São Paulo, also said Moro’s alleged partiality was gravely unethical.

“And to top it all off, Moro accepted a position as Bolsonaro’s minister after contributing to the conviction of the only name that could have beat Bolsonaro in 2018’s elections. The lack of ethics was immense,” she said. 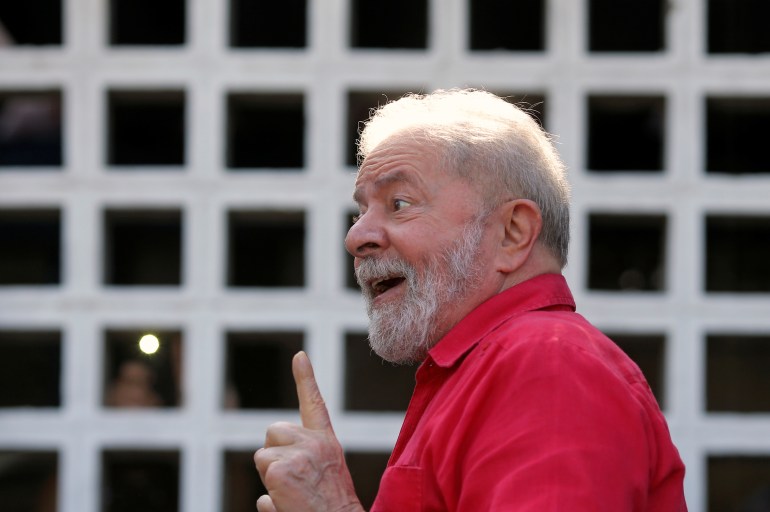 Lula was a widely popular president during his eight years in office [File: Amanda Perobelli/Reuters]

Meanwhile, observers also have questioned the timing and motivations of Fachin’s decision, with Bolsonaro accusing the judge of having “a strong connection” to Lula’s political party.

Alberto Carlos Almeida, a political scientist from the Brasilis Institute in São Paulo, told Al Jazeera Fachin’s ruling “has both a judicial and political aspect to it”.

Lula, a widely popular president over the course of his eight years in office, was leading in 2018 presidential polls before the initial corruption conviction barred him from running, opening the door to Bolsonaro.

The former army captain, who had spent more than 30 years on the backbenches of Congress before winning the 2018 contest, championed the Operation Car Wash scheme during his campaign, painting himself as a staunch anti-corruption outsider.

However, “given [Bolsonaro’s] catastrophic COVID-19 response, the Supreme Court could have decided that it would be better to have Lula as a candidate than not,” Almeida told Al Jazeera, as the country is struggling to get surging coronavirus deaths and infections under control.

Some suspect Fachin’s decision could have been trying to salvage what is left of Operation Car Wash. By annulling all of Lula’s cases, Fachin essentially eliminates the goal of Moro’s trial, which could save the former judge from serious humiliation.

“There’s speculation that if Moro is considered [a] suspect then it could contaminate other cases,” said Fernandes, adding that public perceptions of Operation Car Wash have shifted since 2019 when Moro was selected as Bolsonaro’s justice minister and the leaked messages surfaced.

“Before, you had a very strong operation with a lot of popular support and praise … now, even judges that were once unconditional supporters of [Operation Car Wash] have started to change their position.”