Moscow spread “misleading or unsubstantiated allegations” about the eventual winner, Joe Biden, according to a US government report.

But it said no foreign government had compromised the final results.

“The conclusions of the report… are confirmed solely by the confidence of the intelligence services of their self-righteousness,” the Russian embassy in Washington said in a statement. “No facts or specific evidence of such claims were provided.”

The US is expected to impose sanctions on Russia as soon as next week over the report’s conclusions, three sources told Reuters news agency.

The 15-page report, released on Tuesday by the Office of the Director of National Intelligence, outlined what it said were “influence operations” pushed by Russia as well as Iran.

It said Russian-linked individuals had spread unsubstantiated claims about President Biden ahead of the 3 November election. It also said a disinformation campaign sought to undermine confidence in the broader election process.

President Biden defeated Mr Trump and was inaugurated on 20 January.

The report added that, while Russia had sought to boost Mr Trump’s chances of victory, Iran had launched a “multi-pronged covert influence campaign” in an effort to weaken his support.

The former president pursued a policy of “maximum pressure” on Iran, imposing damaging sanctions and escalating a war of words between the two nations.

The report also concluded with “high confidence” that China, which has long been accused of cyber-espionage by Washington, chose not to “deploy interference efforts” ahead of the vote.

“China sought stability in its relationship with the United States and did not view either election outcome as being advantageous enough for China to risk blowback if caught,” it said. 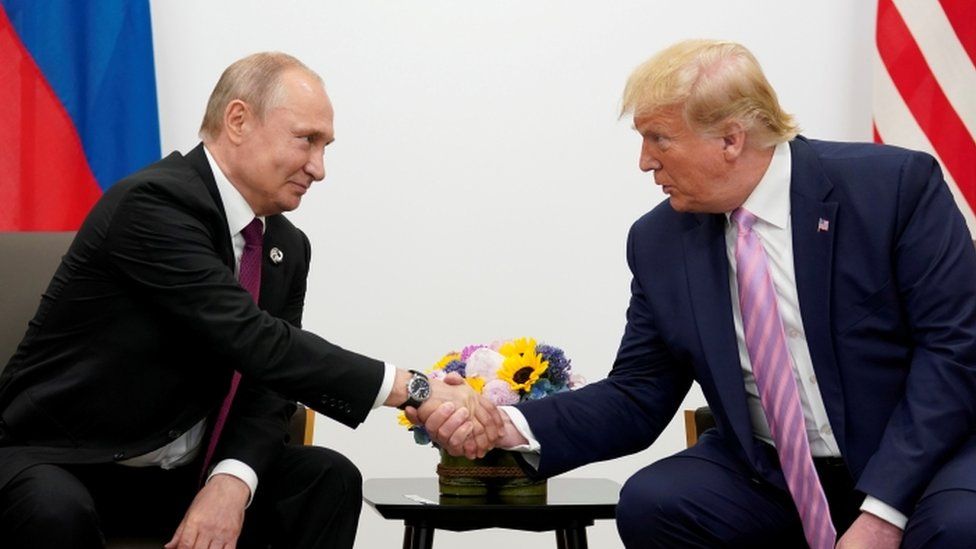 According to the report, the voting process and final results were not interfered with by foreign states.

The intelligence report was released at the same time as a joint investigation by the departments of Justice and Homeland Security which came to a similar conclusion.

But it emphasised that the alleged interference attempts were largely indirect.

“We have no indications that any foreign actor attempted to interfere… by altering any technical aspect of the voting process, including voter registration, ballot casting, vote tabulation, or reporting results,” the document reads.

The US intelligence community said last August that China, Russia and Iran were actively trying to meddle in the forthcoming presidential election.

The assessment found that Russia was seeking to “denigrate” Mr Biden. It also found that China and Iran wanted Mr Trump to lose the vote.

media captionFrom 2016: Gordon Corera reports on an “extraordinary” claim Russia tried to influence the US election