Hassan, 61, made history on Friday when she was sworn in at a ceremony in the commercial capital Dar es Salaam before a roomful of dignitaries.

“It’s not a good day for me to talk to you because I have a wound in my heart,” said Hassan. “Today I have taken an oath different from the rest that I have taken in my career. Those were taken in happiness. Today I took the highest oath of office in mourning,” she said in her maiden speech.

Under the constitution, Hassan will serve the remainder of Magufuli’s second five-year term, which does not expire until 2025.

A former office clerk and development worker, Hassan began her political career in 2000 in her native Zanzibar, a semi-autonomous archipelago, before being elected to the national assembly on mainland Tanzania and assigned a senior ministry.

Rose through the ranks

She rose through the ranks of the ruling Chama Cha Mapinduzi (CCM) until being picked by Magufuli as his running mate in his first presidential election campaign in 2015.

The CCM comfortably won and Hassan made history when she was sworn in as the country’s first ever female vice president.

The pair were re-elected last October in a disputed poll the opposition and independent observers said was marred by irregularities.

She would sometimes represent Magufuli on trips abroad but many outside Tanzania had not heard of Hassan until she appeared on national television on Wednesday wearing a black headscarf to announce that Magufuli had died at 61 following a short illness. 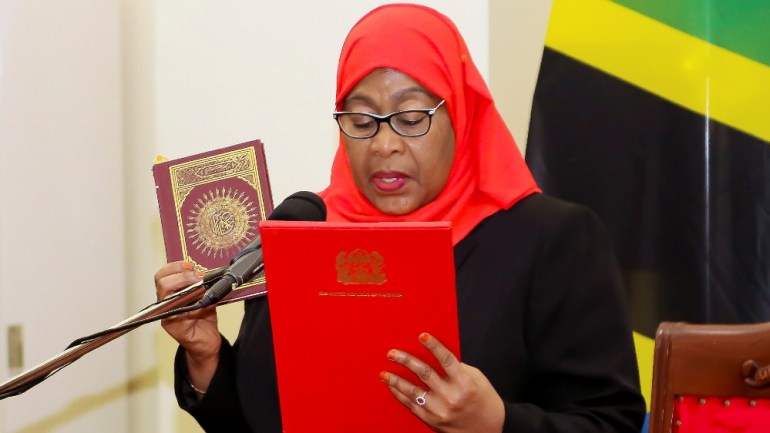 “This is the time to stand together and get connected. It’s time to bury our differences, show love to one another and look forward with confidence,” she said.

“It is not the time to point fingers at each other but to hold hands and move forward to build the new Tanzania that President Magufuli aspired to,” she said, amid opposition claims about the cause of Magufuli’s death.

She will consult the CCM over the appointment of a new vice president. The party is set to hold a special meeting of its central committee on Saturday.

Al Jazeera’s Catherine Wambua-Soi, reporting from Kenyan capital Nairobi, said: “She has just given her maiden speech and it was a very emotional tribute to her predecessor John Magufuli.”

Analysts say Hassan will face early pressure from powerful Magufuli allies within the party, who dominate intelligence and other critical aspects of government, and would try and steer her decisions and agenda.

“For those who were kind of expecting a breakaway from the Magufuli way of things I would say hold your breath at the moment,” said Thabit Jacob, a researcher at the Roskilde University in Denmark and an expert on Tanzania.

“I think she will struggle to build her own base … We shouldn’t expect major changes.” 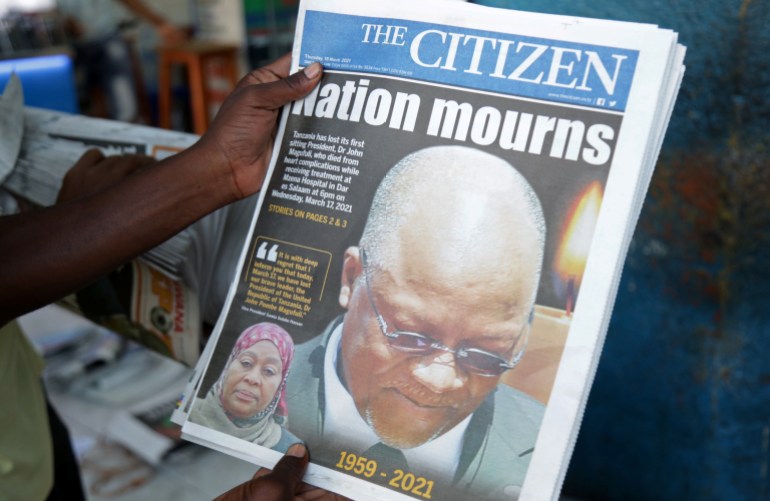 Magufuli, who was first elected in 2015, secured a second five-year term in polls in October last year [File: Emmanuel Herman/Reuters]But Al Jazeera’s Wambua-Soi said that analysts in Tanzania told her that Hassan’s “leadership style is very different from the late president. They say she listens to counsel more and is not one to make unilateral decisions.”

Hassan’s leadership will also be tested on her response to the coronavirus pandemic, which her predecessor dismissed.

“A lot of people are looking to see if she will change strategy. Magufuli had faced a lot of criticism for how he handled the disease. He never put the country in lockdown and never encouraged people to wear masks or sanitise,” the Al Jazeera correspondent said.

Hassan’s loyalty to Magufuli, nicknamed the “Bulldozer” for his no-nonsense attitude, was called into doubt in 2016.

Her office was forced to issue a statement denying she had resigned as rumours of a rift grew more persistent, and Hassan hinted at the controversy in a public speech last year.

“When you started working as president, many of us did not understand what you actually wanted. We did not know your direction. But today we all know your ambitions about Tanzania’s development,” she said in front of Magufuli.

Hassan was born on January 27, 1960 in Zanzibar, a former slaving hub and trading outpost in the Indian Ocean.

Then still a Muslim sultanate, Zanzibar did not merge formally with mainland Tanzania for another four years.

Her father was a school teacher and her mother, a housewife. Hassan graduated from high school but has said publicly that her finishing results were poor, and she took a clerkship in a government office at 17.

By 1988, after undertaking further study, Hassan had risen through the ranks to become a development officer in the Zanzibar government. 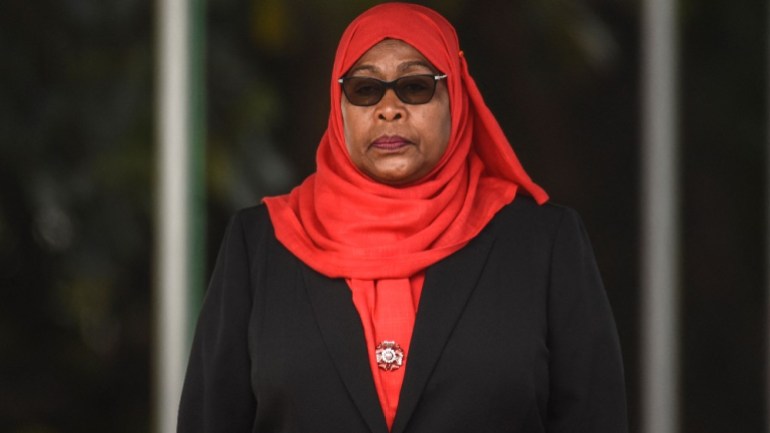 President Samia Suluhu Hassan, a mother of four, has spoken publicly to encourage Tanzanian women and girls to pursue their dreams [AFP]She was employed as a project manager for the UN’s World Food Programme (WFP) and later in the 1990s was made executive director of an umbrella body governing non-governmental organisations in Zanzibar.

In 2000, she was nominated by the CCM to a special seat in Zanzibar’s House of Representatives. She then served as a local government minister – first for youth employment, women and children and then for tourism and trade investment.

In 2010, she was elected to the National Assembly on mainland Tanzania. Then-President Jakaya Kikwete appointed her as Minister of State for Union Affairs.

She holds university qualifications from Tanzania, Britain and the United States. The mother of four has spoken publicly to encourage Tanzanian women and girls to pursue their dreams.

“I may look polite, and do not shout when speaking, but the most important thing is that everyone understands what I say and things get done as I say,” Hassan said in a speech last year.

Hassan is the only other current serving female head of state in Africa alongside Ethiopia’s President Sahle-Work Zewde, whose role is mainly ceremonial. 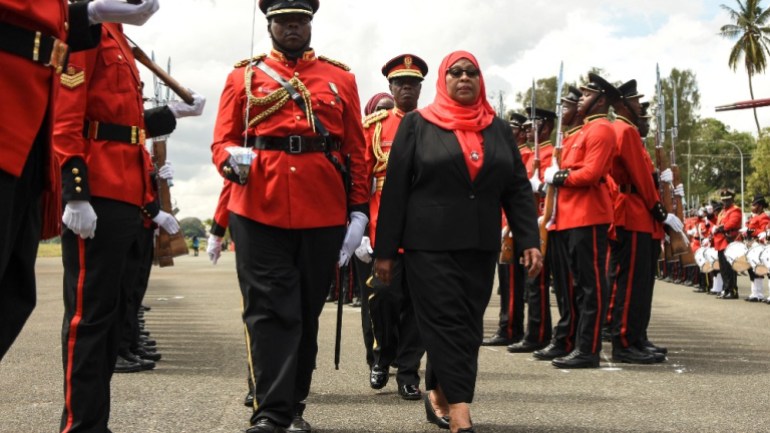 Hassan’s leadership will also be tested on her response to the coronavirus pandemic, which her predecessor dismissed [AFP]SOURCE : AL JAZEERA AND NEWS AGENCIES