The move, announced on Tuesday, aims to mobilise the Gulf Arab state’s private sector to help wean the economy off its reliance on oil exports, which still account for more than half the state’s income, and develop new sectors to help create jobs for millions of Saudis.

The total amount would rise to 27 trillion riyals ($7.2 trillion) with government spending and domestic consumption.

“The new Shareek (Partner) programme will help the private sector create hundreds of thousands of new jobs and will boost the contribution of the private sector to [gross domestic product] by up to 65 percent by the end of the decade,” the prince said.

He later told journalists in a virtual briefing that Aramco and Saudi Basic Industries Corp (SABIC) would represent 60 percent of the five trillion riyal ($1.3 trillion) investment.

Prince Mohammed said the government has asked the biggest participating firms to lower their dividends to raise capital spending. 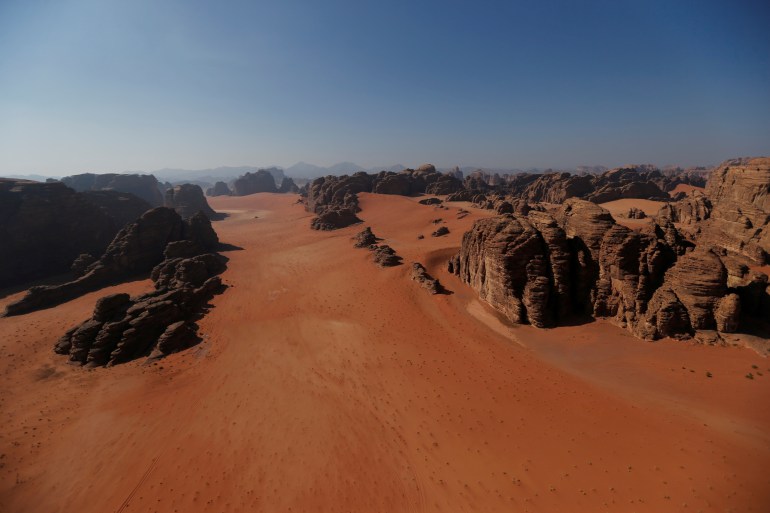 Neom in northwestern Saudi Arabia is slated to be a futuristic economic development zone [File: Hamad I Mohammed/Reuters]“That will lead to growth of the company so stakeholders will own more money. In exchange, the Saudi government will help them with regulations, more subsidies and other incentives.” The prince said dividends for those owning shares in Aramco, which listed on the local bourse in 2019, would remain stable.

“We promised them that and we will keep that promise,” he said. The Saudi government still owns 98 percent of the firm.

The crown prince said the government planned to offload its shares in companies in the coming years and to launch initial public offers (IPOs) for projects it is launching.

“We will recycle the money. We shouldn’t keep our shares forever. Whatever mature investment we have we have to IPO. So for example if you own 70 percent of a company, PIF should maintain majority at 30 percent and sell 40 percent,” he told journalists.

The prince has said that Aramco would sell more shares as part of plans to bolster sovereign wealth fund PIF, the main vehicle for boosting Saudi investments at home and abroad.

The prince said that PIF is working with other sovereign wealth funds in the region on a fund called “Invest In Saudi” that would be worth between 500 billion riyals ($133bn) to one trillion riyals ($267bn).

PIF is backing domestic mega-projects such as the flagship tourism project at the Red Sea, planned $500bn Neom economic zone and the entertainment hub at Qiddya.