United States President Joe Biden convened the first meeting of his Cabinet on Thursday amid social-distance protocols at the White House and plans to promote the new administration’s COVID-19 relief and recovery agenda nationwide.

Biden said he was appointing five Cabinet members to work with Congress and communicate to the American public his economic plan including an emphasis on buying products made in the US.

The Biden administration is committing to a buy-America plan “to make sure that when the government is spending taxpayers’ money that they’re spending on American-made goods, American corporations, and American employees,” Biden said.

“Today, I’m directing every member of the Cabinet – I mean this sincerely, everyone – to take a hard look at their agency spending, and make sure it follows my buy-American standard,” the president said.

Congress passed and Biden signed a $1.9 trillion COVID-19 relief bill last month that includes $1,400 direct payments to most US citizens and billions of dollars in funding for small businesses, states and local governments hurt by the pandemic.

Now with his full team in place, Biden administration officials and congressional Democrats are seeking to explain the benefits of the legislation at the local level as the party seeks to lead the US out of the pandemic. 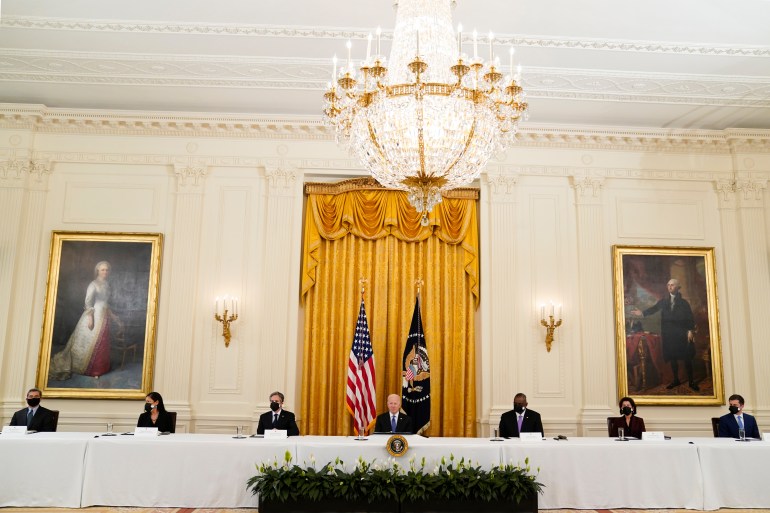 In 2020, the US suffered the sharpest economic contraction since the end of World War II. Ten million workers remain unemployed even as the US economy shows signs of a return to normal.

Biden’s full Cabinet of 15 executive secretaries was confirmed by the US Senate in a series of votes beginning in January and culminating last week with the approval of Marty Walsh as secretary of labor.

Other Cabinet-level positions that required confirmation by the Senate include the Director of National Intelligence Avril Haines, US Trade Representative Katherine Tai and UN Ambassador Linda Thomas-Greenfield.

The Cabinet also includes Vice President Kamala Harris and White House Chief of Staff Ron Klain for a total of 25 members in addition to the president.

All told, the Biden Cabinet is the most diverse in US history with 10 women, six Black Americans, 4 Hispanics and the first Native American to hold a Cabinet post.

Biden has faced questions about why there are no Asian Americans among his Cabinet department heads. Trade Representative Tai, who holds a Cabinet-level position but does not head a department, is the first Asian American to hold that post and attended Thursday’s meeting.

“Cabinet meetings are an opportunity for the president to lay out broad directions for how his team should operate,” Chris Lu, former President Barack Obama’s first-term Cabinet secretary told The Associated Press.