The situation of human rights in the United States deteriorated further in 2020 as the COVID-19 pandemic and the presidency of Donald Trump exacerbated pre-existing rights concerns while the Black Lives Matter movement against police brutality exposed widespread racism, according to a new report on global human rights by Amnesty International released Tuesday.

The report lists 15 human rights areas of concern in the US, including unlawful killings of civilians, LGBTQ rights and the right to peaceful assembly.

“Our history is built on our Bill of Rights and the First Amendment … that guarantees the right to peaceful assembly, free speech and free expression”, Joanne Lin, Amnesty’s national advocacy director, told Al Jazeera.

“But as we have seen in our own country, those rights can be placed in great peril and are often under tremendous assault, especially during times of crisis.”

The report says the complications of the COVID-19 pandemic, which caused lockdowns – resulting in widespread job loss – and an “[i]nadequate and uneven government responses” that had a “disproportionate and discriminatory impact on many people based on their race, socioeconomic situations and other characteristics.”

The pandemic also hit those incarcerated in the US, who are disproportionately people of colour, “due to insanitary conditions in prisons and detention where they were unable to adequately physically distance and had inadequate access to hygienic supplies”. 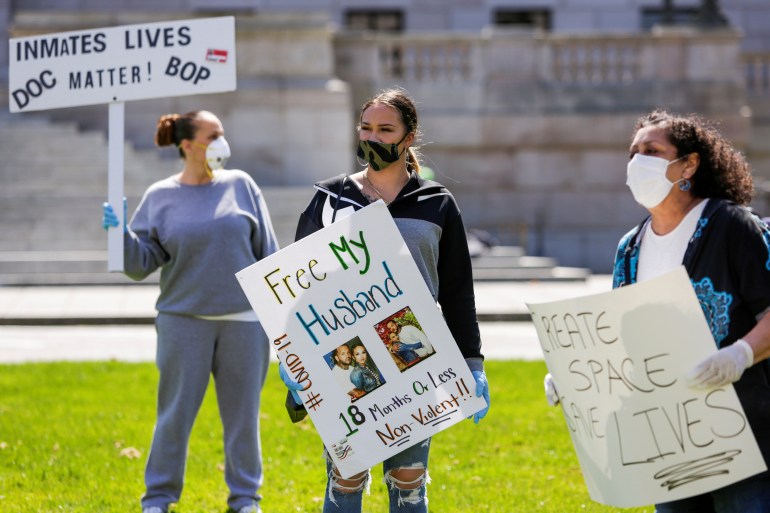 Family and people concerned about the safety and health of prison inmates during the COVID-19 outbreak protest outside the Washington state capitol as efforts continue to slow the spread of the coronavirus, on April 11, 2020 [File: Jason Redmond/Reuters]Numerous prisons and jails across the US experienced serious outbreaks.

Some lessened their populations to create space for incarcerated people through early release programmes at the beginning of the pandemic, such as the Santa Rita Jail in Alameda County, California. These appeared to result in lower COVID-19 cases.

Still, systemic issues continued, and many jails and prisons slowed their inmate release programmes, according to the Prison Policy Initiative.

As recently as January, a city jail in St Louis, Missouri housed a COVID-positive pretrial detainee for 14 days before authorities were informed, according to documents obtained by Al Jazeera.

The report focuses on 2020, the last year of former President Donald Trump’s term of office. The report says the “Trump administration’s broadly dismal human rights record, both at home and abroad, deteriorated further during 2020.”

Amnesty notes that at least 1,000 people were killed by police firearms and that publicly available data suggests the killings disproportionately affect Black people. 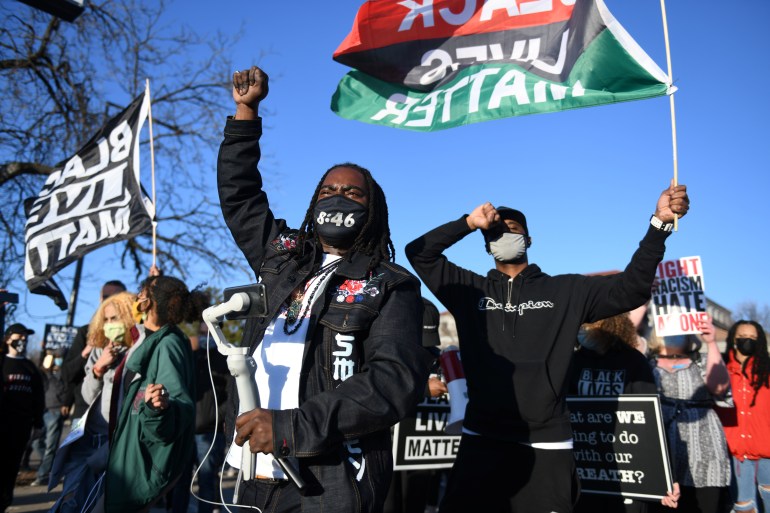 Black Lives Matter demonstrators march in St Paul, Minnesota, the US on March 19, 2021 [Nicholas Pfosi/Reuters]Further, law enforcement committed “widespread and egregious human rights violations against people protesting about the unlawful killings of Black people and calling for police reform” during the summer uprisings.

Amnesty “documented 125 separate incidents of unlawful police violence against protesters in 40 states and Washington, DC, between 26 May and 5 June alone”, the report says.

Discrimination based on country of origin, gender and sex

Members of the LGBTQ community also faced continued difficulties in the US, according to data released that year.

“Hate crimes based on sexual orientation or gender identity remained high in 2019 for a fifth consecutive year. Trans women of colour were especially targeted for violent hate crimes and killings”, the report says, citing the released data.

The challenges were made worse by the Trump administration’s use of “courts to continue to dismantle protections against discrimination based on sexual orientation and gender identity in education, the military, employment and other areas of federal government”, the report claims. 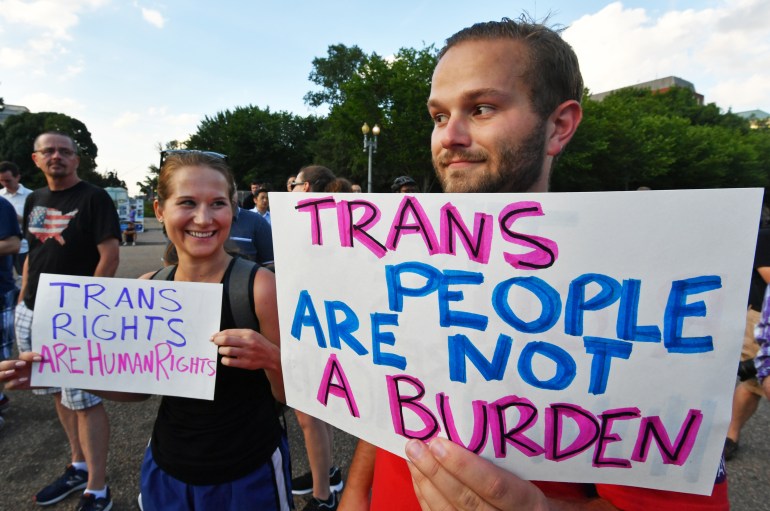 Protesters gather in front of the White House on July 26, 2017 [File: Paul J Richards/AFP]The administration of President Joe Biden has taken steps to dismantle these moves.

Biden reversed a Trump order barring most trans people from serving in the military on January 25.

The Pentagon announced last week that it will set new rules regarding trans servicemembers, ending the Trump-era restrictions.

Biden won November polls on a centrist platform, promising to undo most of Trump’s policies, including those seen as threats to the rights of refugees, asylum seekers and immigrants.

Biden has faced criticism for what some view as a similar practice along the US-Mexico border. Facilities for unaccompanied migrant children that were criticised by Democrats under Trump are now reopening amid a surge in migration, as the Biden administration begins processing their claims for asylum.

“One of the hallmarks is how the government treats migrants, refugees, asylum seekers and people in search of humanitarian protection,” Lin said.

While the US has “started to process the claims of unaccompanied children seeking protection at the border, the Biden administration still is made very clear that the border is closed to adults who are in search of asylum and humanitarian protection. And that is terribly problematic,” she said.

Lin noted that keeping the border closed “violates US obligations under the Refugee Convention” and its “commitment to providing due process and a fair day in court”, which are guaranteed by the US Constitution.

“So, the current administration has sought to undo some of the damage from the prior administration, but there’s still so much more that they need to do”, Lin concluded.