The Niger State Independent Electoral Commission, NSIEC has declared the All Progressives Congress (APC) winner in 22 out of the 23 chairmanship seats announced so far, while the opposition People Democratic Party, PDP got 1 seat. Results of the remaining two local councils are still been awaited.

The Chairman of the state electoral body, Alhaji Aminu Baba, who disclosed this on Sunday during a press briefing in Minna, said the PDP won the chairmanship in Gbako Local Government.

Baba said Mashegu and Tafa Local Government areas were yet to submit their results to the commission.

He noted that the election was inconclusive in seven wards in four local government areas, adding that a date for rerun in the affected areas will be communicated soon.

According to him, results for the councillorship elections were still been collated and would be announced in due course.

He further stated that nine political parties contested the elections, comprising 85 candidates for chairmanship and 616 councillorship contestants across the 25 local government areas of the state.

The state electoral boss commended security agencies for ensuring a hitch free conduct of the polls.

“We as a commission are proud to say the elections were generally impressive especially with novel innovations introduced by the commission to ensure free and fair elections.

“We must express our appreciation to the police, DSS, NSCDC and all other security agencies for their support towards a peaceful and successful conduct of the election,” he added.

Related Topics:
Up Next

Why Tinubu May Decide to Play Osinbajo as His Trump Card

Politics of 2023 has started and the process of brining onboard fresh heads for the plum seat, is in full throttle with the unabashed interest of the National Leader of the All Progressives Congress, Senator Bola Ahmed Tinubu to lead Nigeria, writes Emameh Gabriel.
The 2023 general election is just around the corner with less than two years remaining for the incumbent administration of President Muhammadu Buhari, the road to 2023 continues to garner interest.

The Chairman of the Independent National Electoral Commission (INEC), Prof. Mahmood Yakubu, said on Monday the commission would release a comprehensive list of its new polling units across the country next week.

Yakubu, who disclosed this at the formal handing over of a new state of the art fire truck deployed by the Federal Fire Service to the commission’s headquarters in Abuja, added that details of the locations of its registration centres and the procedure for the commencement of online registration Continuous Voter Registration (CVR) would be made available in the second week of June.

He thanked the Federal Fire Service and all security agencies for demonstrating their support for the protection of INEC facilities nationwide.

Yakubu said: “We earlier assured Nigerians that we shall conclude work on the expansion of voter access to polling units and make the new polling units available to citizens ahead of the CVR exercise.

“I am glad to report that we have accomplished this task for the first time in 25 years.

“A comprehensive list of the new polling units will be published next week.

“Similarly, details of the locations of the registration centres and the procedure for the commencement of online registration will also be made available after a series of regular consultative meetings with stakeholders next week.”

He said that as a member of the Inter-Agency Consultative Committee on Election Security (ICCES) FFS had been as concerned as other security agencies about the recent attacks on INEC offices across the country.

The INEC chief added: “This is particularly so because out of the 42 attacks on our facilities nationwide, 18 incidents resulted from arson and three more by a combination of arson and vandalisation.”

Several world leaders have welcomed Israel’s new government, but Palestinians remained defiant over what they perceived as a continuation of the previous administration.

Benjamin Netanyahu’s 12-year grip on power ended on Sunday, his administration replaced by a coalition government cobbled together by the centrist Yair Lapid and ultra-nationalist Naftali Bennett. In a razor-thin 60-59 confidence vote, Israel’s parliament approved the new government.

The vote was won after Lapid finalised a coalition deal between eight different parties with little in common, aside from the desire to topple Netanyahu, leaving many analysts to question the new government’s chances of long-term survival.

Here is how world leaders reacted to the new government:

US President Joe Biden said the United States remained committed to Israel’s security and would work with its new government. In a statement, the US president welcomed the new government coalition led by nationalist Naftali Bennett and sought to reaffirm US-Israel ties.

“I look forward to working with Prime Minister Bennett to strengthen all aspects of the close and enduring relationship between our two nations,” Biden said. “Israel has no better friend than the United States.“

The United States remains unwavering in its support for Israel’s security,” Biden said. “My administration is fully committed to working with the new Israeli government to advance security, stability, and peace for Israelis, Palestinians, and people throughout the broader region.”

“Germany and Israel are connected by a unique friendship that we want to strengthen further. With this in mind, I look forward to working closely with you,” Merkel said in a message addressed to Bennett and shared by her spokeswoman Ulrike Demmer on Twitter.

The office of Palestinian President Mahmoud Abbas said that the change in government remains an Israeli matter and that Palestine’s demands remain the same.

“This is an internal Israeli affair,” Nabil Abu Rudeineh, Abbas’s spokesman, said in a statement. “Our position has always been clear, what we want is a Palestinian state on the 1967 borders with Jerusalem as its capital,” he added.

Hamas spokesman Fawzi Barhoum insisted that no matter the colour of the new administration, Israel “remains a colonial entity”.

“Regardless of the shape of the government in Israel, it will not alter the way we look at the Zionist entity,” Barhoum said. “It is an occupation and a colonial entity, which we should resist by force to get our rights back,” he added.

Austrian Chancellor Sebastian Kurz congratulated Bennett and Lapid and said he looked forward to working with them.

“Austria is committed to Israel as a Jewish and democratic state and will continue to stand by Israel’s side,” he said on Twitter. 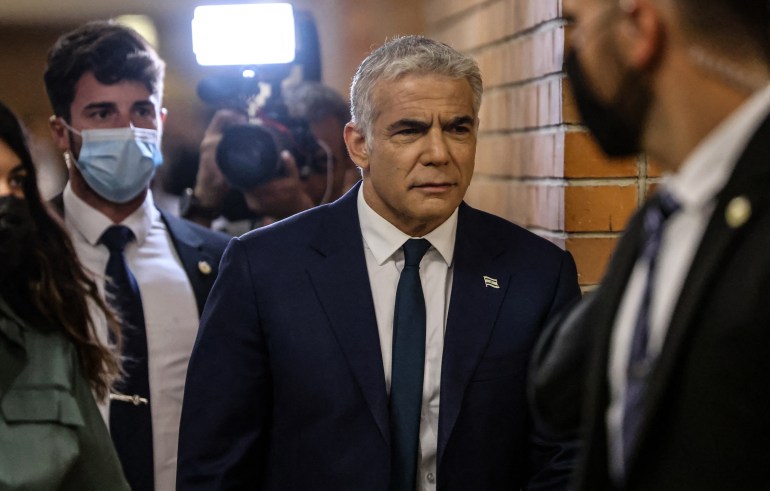 The United Kingdom’s foreign minister also congratulated Bennett and Lapid on the formation of the government.

In a tweet, Dominic Raab said he looked forward to continued UK-Israel “cooperation on security, trade and climate change, and working together to secure peace in the region”.

Canadian Prime Minister Justin Trudeau said he looked forward to working with Bennett and Lapid “to keep our people safe and supported as we recover from the global COVID-19 pandemic, and help both of our countries build back better”.

In a statement, Trudeau said the leaders would “explore ways to further strengthen the relationship between Canada and Israel”, including through a bilateral trade agreement. He also thanked Netanyahu “for his valuable partnership over the years”.

US Senate Majority Leader said he hoped the new government will pave the way for “serious” negotiations over a two-state solution to the Israeli-Palestinian conflict.

“I am urging the Biden Administration to do all it can to bring the parties together and help achieve a two-state solution where each side can live side by side in peace,” Schumer said. 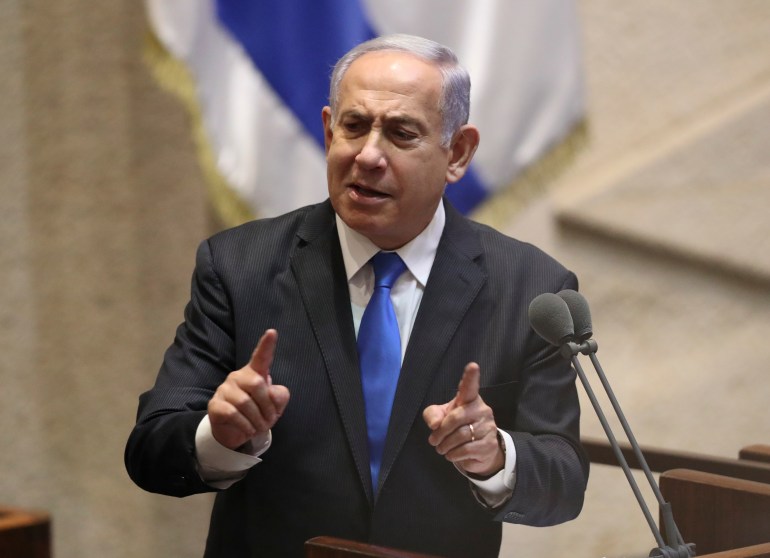 Netanyahu promised that he would be back [Ariel Schali/AP Photo]

“Do not let your spirit fall,” he said on Twitter. “We’ll be back – and faster than you think,” he added.SOURCE: AL JAZEERA AND NEWS AGENCIES